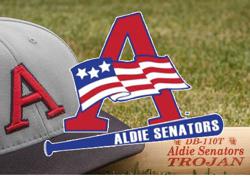 The Aldie Senators were a collegiate summer baseball team based out of Aldie, Virginia. They competed in the Northern Division of the Valley Baseball League and played their home games at John Champe High School. The team dropped out of the league after the 2015 season.[1]

Blue Ridge Baseball Inc. is a not for profit 501(c)(3) organization focused on developing talented young baseball players.  In 2012, we began organizing youth travel teams in the Aldie, VA area to provide competitive baseball for local athletes.  The Aldie Senators are currently fielding teams of players in the 8U-16U age groups.